On a two-dimensional rectangular grid

. The preferred arrangement of the solution vector is to use natural ordering which, prior to removing boundary elements, would look like:

This will result in an mn x mn linear system: 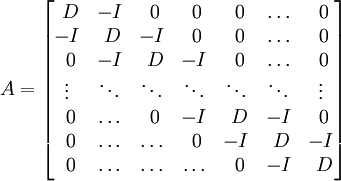 is the m x m identity matrix, and 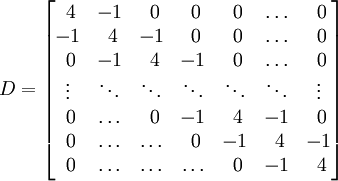 equation, the columns of

while the columns of

to the left and right of

From the above, it can be inferred that there are

. It is important to note that prescribed values of

. For the common case that all the nodes on the boundary are set, we have

) grid with all the boundary nodes prescribed, the system would look like: 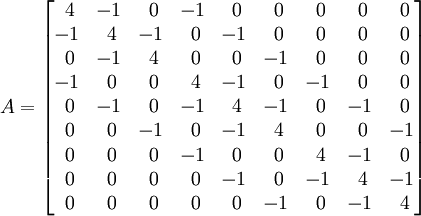 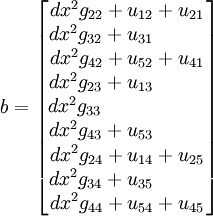 As can be seen, the boundary

's are brought to the right-hand-side of the equation. [2] The entire system is 9 x 9 while

is block tridiagonal and sparse, many methods of solution have been developed to optimally solve this linear system for

. Among the methods are a generalized Thomas algorithm, cyclic reduction, successive overrelaxation, and Fourier transforms. A theoretically optimal

In Computational fluid dynamics, for the solution of an incompressible flow problem, the incompressiblity condition acts as a constraint for the pressure. There is no explicit form available for pressure in this case due to a strong coupling of the velocity and pressure fields. In this condition, by taking the divergence of all terms in the momentum equation, one obtains the pressure poisson equation. For an incompressible "Flow" this constraint is given by:

is the velocity in the

is the velocity in the

direction. Taking divergence of the momentum equation and using the incompressibility constraint, the pressure poisson equation is formed given by:

is the kinematic viscosity of the fluid and