For many iterative methods, the number of iterations required to reach a converged solution is linearly proportional to number of nodes in one direction. This behavior could be rooted out to the fact that during the iteration process, the information travels only one grid size per iteration. While for proper convergence, the information has to travel back and forth several times.

Since direct matrix inversion is out of the question for realistic problems and since the solvers that rely on conjugate-gradient methods have robustness problems associated with them, the methods of choice are point implicit solvers like Gauss-Seidel, Jacobi, and SOR.


To take advantage of this fact, Multigrid methods are based on the idea of defining coarser grids on which a low frequency error will be seen as a high frequency one. This is illustrated in the figure below. 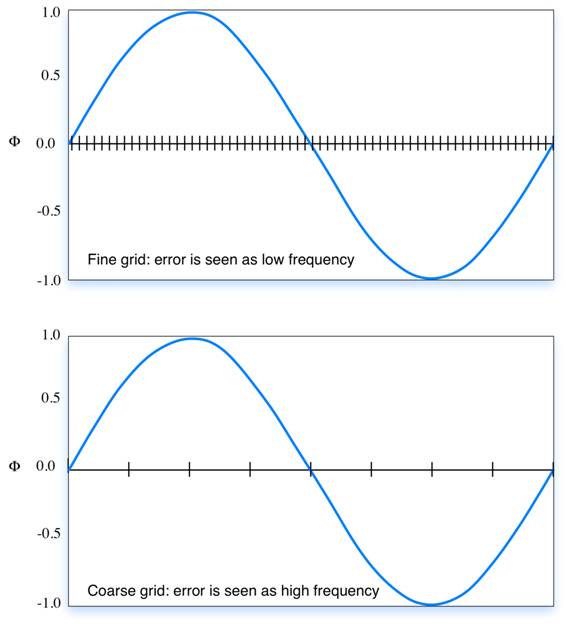 Multigrid methods effectively reduce the distribution of low frequency errors which makes them the ideal ingredient to be used with standard solvers.

Note: Multigrid is NOT a solver. It is a technique used in conjuction with a linear solver to yield a better covergence rate.

In the context of multigrid techniques, some of the most commonly used terms are Agglomeration, Restriction, and Prolongation.

As it was shown in the previous section, all multigrid methods require a definition of a succession of coarse grids, based on the original "fine" grid. The process of defining the coarser grids involves what is called Agglomeration, i.e. the combination of several nodes or control volumes or coefficients from the original grid.

A Restriction operation is defined as the interpolation method used to inject the error from a fine grid to a coarser one.

A Prolongation operation is the inverse of restriction and is defined as the interpolation method used to inject the residual from the coarse grid to the finer one.

Subsequent sections will explain how agglomeration, restriction, and prolongation work.

In the Geometric Multigrid, agglomeration of the nodes (cells, elements, or control volumes) takes place on the geometric level, and a set of new data structures representing the coarse grids need to be constructed for each level. This method is usually difficult to deal with when using the finite volume method since the FVM is based on a cell centered discretization which makes it difficult to define irregularly shaped control volumes.

On the other hand, the Algebraic Multigrid performs the agglomeration using the coefficient matrix only (hence the name algebraic). In the AMG method, specially chosen coefficients of the matrix are combined together to form a new coefficient matrix representing the coarser grid and no new discretization is required on the coarse grids.