is the perturbed viscous force vector,

In order to resolve the aforementioned matter, the linearized perturbed compressible equations (LPCE) have been proposed by Seo and Moon. The LPCE is a modified version of the original PCE for very low Mach number aeroacoustics. In the LPCE formulation, the evolution of perturbed vorticity is firmly suppressed by dropping the coupling terms that generate vortical components in the perturbed system. This is for excluding possible errors caused by its instability, deliberating the fact that perturbed vorticity is not an important acoustic source for low Mach number flows. A set of LPCE can be written in a vector form as,

The LPCE is linearized to a base incompressible flow field and its formulation is much simpler than the original PCE. The perturbed vorticity evolution is surely suppressed in the LPCE formulation, since the curl of linearized perturbed momentum equations, yields

Consequently, the LPCE prevent any further changes (generation, convection, and decaying) of perturbed vorticity in time and a physical base for large grid spacing near the wall is also established, since they are an invisicd form of equations. The details about derivation of LPCE and the characteristics of perturbed vorticity can be found in Ref.(Seo and Moon, 2006). The left hand sides of LPCE represent the effects of acoustic wave propagation and refraction in the unsteady, inhomogeneous flows, while the right hand side only contains the acoustic source term, which will be projected from the hydrodynamic flow solution. For very low Mach number flows, it is interesting to note that the total change of hydrodynamic pressure

is considered as the only explicit noise source term. It agrees with the result of Goldstein in his generalized acoustic analogy, specifically on the linearized Navier-Stokes equations to a 'non-radiating' base flow field. Ewert and Schroder have also shown that the dominant acoustic source from the flows at the incompressible limit can be represented by the hydrodynamic pressure. It is also considerable for the turbulent flow noise. The static pressure field of incompressible LES presents the features of turbulent flow and their noise can be predicted by the LPCE through the time changes of this pressure field. Therefore, the LPCE could exclude the uncertainty of modeling the source term for flow noise by turbulence.

Here are an example of the hydrodynamic/acoustic splitting method. The following figures show Aeolian tone generated by cross flow over a circular cylinder at Re = 180 and Ma = 0.1. The first image is the result of DNS and the next one is the result of Hydrodynamic/acoustic splitting method (incompressible NS/LPCE). The LPCE are computed on the four-times coarser grid. As one can see, the results are almost the same. 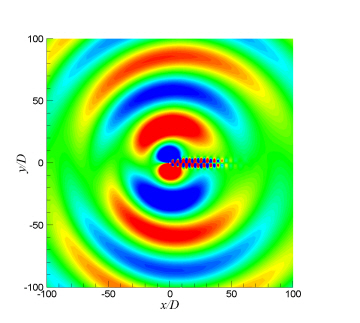 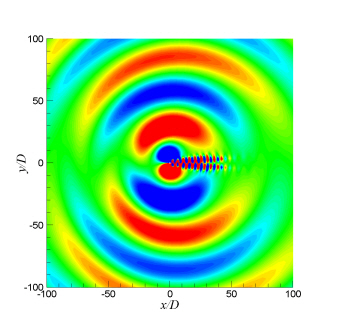