Preface. 2D test problem was introduced more then fifty years ago in the paper by Emery [1], but it overall public acknowledgement was taken place after paper by Woodward and Colella was published in 1984 [2]. This problem has proven to be useful test for a large number of numerical methods, schemes and algorithms during large number of years.

Geometry. The wind tunnel is 1 length unit wide and 3 length unit long. The step is 0.2 length units high and is located 0.6 length units from the left-hand end of the tunnel. We assume here that tunnel has an infinity width, or in other words we consider two-dimensional planar base flow.

= 1.4), which everywhere has density 1.4, pressure 1.0 and velocity 3. Gas with such properties is continually fed in from the left-hand boundary.

Singular point. The corner of the step is the center of rarefaction fan and hence is a singular point of the flow. Frankly speaking the flow is seriously affected by large numerical errors generated just in the neighborhood of this singular point if nothing special is not undertaken. The modern study shown that the presence of such point in flow may lead to phase – time delay [3]. Generally there are two ways to reduce or eliminate this point. The original idea was proposed by Woodward [2] and consisted of applying special boundary conditions near the corner of the step, which is based on the assumption of a nearly steady flow in this region. The density was reset here so that the entropy has the same value as in the zone just to the left and below the corner of the step. The magnitudes of velocities (but no their directions) were reset also, so that the sum of enthalpy and kinetic energy per unit mass has the same value as in the same zone to set the entropy. More sophisticated and accurate approach may be applied to solve this problem at present. One can make a little fillet to avoid the straight angle in the step corner. Robust unstructured meshes allow additionally preparing some grid refinement in this region.

Numerical solution. The time evolution, up to time 4 in the wind tunnel may be found in [2]. Since the flow at time 4 is still unsteady and steady flow develops by time 12, it’s accepted in general to focus on the flow structure at time 4. Typical state-of-the-art solution obtained in one the commercial CFD codes based on dynamic local grid refinement is displayed in Fig1: (a) – unstructured triangular mesh, contours of log density, contours of the quantity

(or numerical noise), which is a function of entropy. Main discordance, which should be underlined - Kelvin-Helmholtz instability development starting from the trinity point - intersection of the main strong shock wave and upper Mach disk. Such instabilities evolution is amplified by numeric errors generated in the trinity point while shock waves interaction independently of mesh density. Increasing the dissipation of the numeric scheme near such a shock-waves interaction can eliminate this effect. 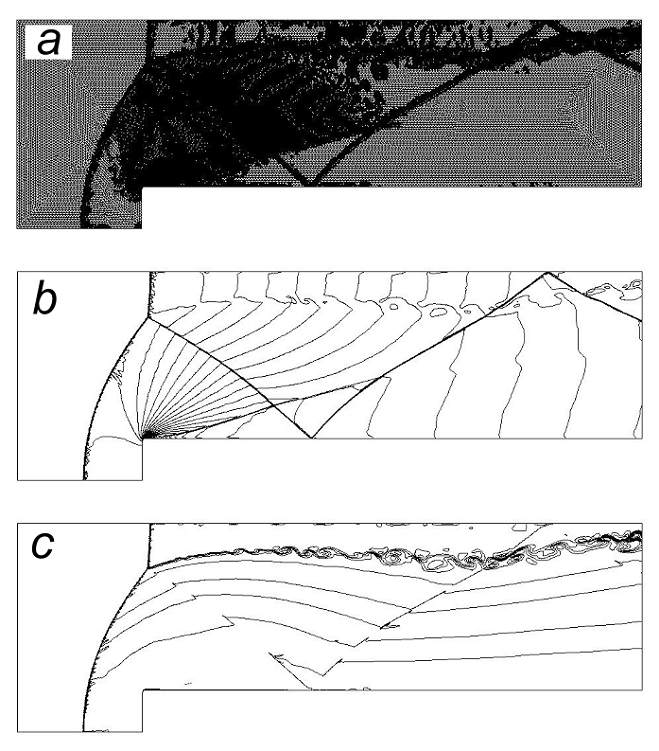